I have still not covered the distance I should have, given I have the Norfolk 100K coming up.  I was offered some reassurance by a very experienced runner about this just last week:  I was told that some runners who do the occasional bit of distance work, just push harder on their shorter races, and on the ultra day, eat well, and just slow it all down.  I am not sure I am convinced, and at the very least, I like to get long distances in, as for me they serve as confidence boosters.

Although I very much enjoyed my most recent ‘confidence booster’, it didn’t end well.  Fellow Ely Runner, Emily, is working towards the Stour Valley Path 50K, and at the time of writing she completed a marathon yesterday:  she is disciplined when it comes to getting miles under her belt, but she does tend to prefer notching up the miles with a bit of company.  So, we decided on trail: 20 miles for Emily and 26 for me.  We compared notes on ultra vests, arrangements for carrying water (Emily carries a lot of water), food, and off we set along the river from Ely.

The run was fun, but wow was it a warm day on the 2nd June!  We stopped a couple of times to drink and catch our breath;  we noticed that our heart rates and breathing were up a bit compared to our usual.  On the river, we encountered a bull, cows and their young.  The bull was not shifting, and we decided that this was fine, but it was probably better if we did not spook the cows.  This meant we had to climb down a steep bank, and we decided that if the cows did get bothered about us being around their calves, we could jump in the river:  thankfully this was not necessary, but it did result in the beginning of some pretty stung legs for both of us.  The run was uneventful other than finding that much of the trail was very overgrown, mainly with nettles and thistles.  We had no choice but to push through all of this;  and even though we both got stung, it was odd how Emily’s legs bled but mine didn’t.  Emily and I had a good laugh during this run; she is dead interesting to talk to; very funny; and she is one of those people who says it as it, is: I need to emphasise; Emily really says it as it is!  She is also very stubborn, and although she is happy to tell you what she does not enjoy about distance training, and the aspects that she finds emotionally difficult, she is tough, and gets it done.   I think this must be a common theme among ultra runners; there might be calm ones, neurotic ones, all types: but all stubborn.  At least I think so!

We stopped at ten miles as we had intended to do an ‘out and back’, with me carrying on for six more miles on our return to Ely.  We sat and ate, but not for long, we drank more, and then headed back.  Emily showed the first signs of struggling with the heat on the way back, as did I, but Emily was happy to have a bit of a polite complain and she did warn me to heed the possibility of impending grumpiness!  As it turns out, there was no grumpiness, but I did have the sudden and urgent need for full-fat Coke.  I had been using Tailwind in my water bottles and I had drank well enough (we had also had a water top-up at a marina we passed though).  I don’t usually like full-fat Coke, but I have found myself craving it during and after long runs.  We stopped at a riverside pub and I was satiated.  Or so I thought.  I noticed I was thirsty; all of the time,  even though I had steadily drank around two litres of water with Tailwind and the Coke.  We both started to feel a little worse for wear as we entered Ely.  Emily and I parted ways, and I spotted an Ice cream van by the river: armed with one orange ice lolly, I ran with it through Ely Country Park, determined to get the additional six miles in.  I ran a loop, which saw me approach Ely Sailing Club, I was slowing down and not feeling well.  I laid down on the grass and had a think.  My parents’ house was very near by, so I ran there and took stock.  My Mother looked very worried as I threw myself onto a shaded part of her lawn.  I necked half of the pint of squash she gave me, and I readily accepted her offer of a lift home.  My heart rate was higher than usual for a run like this.  The idea of pushing myself through things I do not want to do went out the window, as this time, there was clearly something wrong.  I have coped with these distances and much further before, and I have ran in the heat.

I spoke with a few people about this run, and in my case, it is likely that I went out insufficiently hydrated before; and I mean the night and day before the run.  In Emily’s case, she just felt it was the heat that caught her out.  I still enjoyed this run and put it down to experience.  I must hydrate more efficiently the day before long runs.

Four days later was the Kevin Henry League race in Newmarket.  I love these events and the feeling that comes from seeing so many Ely Runners turning up and supporting each other.  I decided about 0.5K in to give it a bit of welly.  I finished the race way slower than I did at the same venue last year (when I got my 5K PB), but it was fun!

There then followed rest days, and the odd bit of trail running.  I had a rough experience after Littleport parkrun, having run to and completed this superb event, the run back was into a strong headwind, in rain and through plenty of standing water.  Before I left Littleport, three people offered me lifts:  but I was back in the ‘right’ frame of mind.

The 2019 Sutton Beast was superb!  It is a tough race, but I decided to wind it down a little, to try running at a lower heart rate and to pace a good friend.  I enjoyed it, for many reasons, not least because Sutton Beast was my first ever organised event a few years ago.  My sons loved the Mini Beast!

The Ely Runners 2019 10K handicap was huge fun, not least because of the banter in the lead up (the word ‘bandit’ crops up a LOT). I felt I did OK, I overtook a few people and a few more overtook me.  I was slower than last year, but I gave it a little bit of stick.

Today, I caught the early train from Ely to Waterbeach so that I could run back along the river.  The nettles situation was even worse than when I ran with Emily:  I had little choice but to run through them.  This led to tingling over both legs all day.  I encountered the same bull and herd as I did when running with Emily, and again, I stopped for a sandwich and to just sit and look.  I took in some audio book during this run: “Extraordinary Insects” by Anne Sverdrup-Thygeson.  Absolutely fascinating.  I find Audible and Podcasts a joy on long runs if I am alone.  This run went well, I enjoyed it, no issues.

In just under a week, I will be having a stab at the Norfolk 100K with Lisa (who I ran Peddars Way with back in January).   This is what my lack of training has been leading up to!  I will blog a post-mortem at some point!

2 thoughts on “Not enough distance, but still forcing myself!” 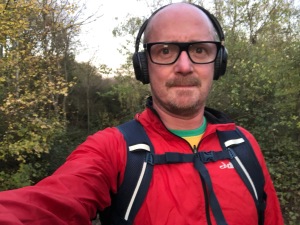 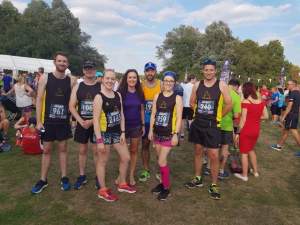