It’s been a while since my last blog.  I have used Peddars as an excuse for my sluggish running for too long, and now I have put all the weight back on (and maybe a bit more).  It is time for me to train properly again as I have signed up for the Norfolk 100K in June and the Stour Valley Path 50K in August.  But for now, some ramblings on what I have been up to.

March 29th was the Night Trail 10K at High Lodge.  This was a superb event, with a great Ely Runners turnout.

Night trail is massive fun, especially if you are with your running buddies.  This was a technical run in that you had to watch where your feet landed, almost all the time, and it was pitch-dark apart from the area illuminated by your own head-torch (just in front of your feet) and the spot lights of other head-torches ahead and behind you.  One thing I noticed was how tough it was when you found yourself running uphill and had no warning of it due to the dark:  it just suddenly got harder!  I will be repeating this one next year!

I might as well take the opportunity to harp on a bit about the Ely Runners Beginners’ course, simply because it is so brilliant.  It is the success story of a couple of Ely Runners who set it up years ago, and a band of coaches who have kept the course going until the present day.  I now co-ordinate/ lead the course.  It results in two groups of people graduating each year having trained to improve their running;  especially at the 5K distance.  Many of the graduates of the course complete a local parkrun, with club members supporting them.  A good few of them go on to the join the club.  It all works due to the dedication and enthusiasm of a group of coaches who give up their time!  I could go on about this forever, because I love it so much.  If anyone wants to know more, email beginners@elyrunners.co.uk

I did something a little different on April 14th:  The Rutland Spring Half Marathon.  An old University buddy/ one of my very closest friends was running it, and he suggested I sign up:  I am highly suggestible and vulnerable when people ask me to sign up for stuff.  No, really!

My mate, Ralph, is a member of Desborough & Rothwell Running Club.  We first met when I was 18, and I think the Rutland Half is the only thing we have ever done together that has not involved beer!  Ralph sent me some of his recent shorter distance times a day or two before the race, and these concerned me in that it was agreed that I would be pacing him!  It was a stunning day when we met up at Rutland Water, and I was chuffed to see fellow Ely Runners, Andy and Caroline. 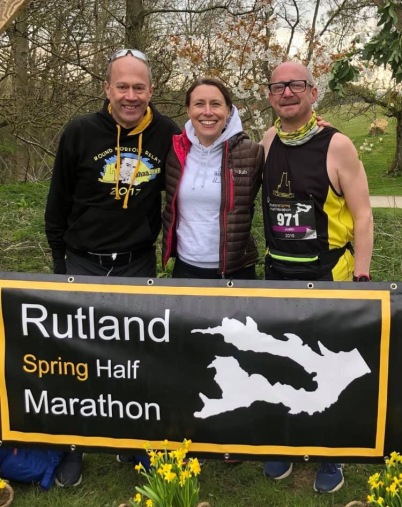 With the awesome Andy and Caroline

The scenery around Rutland Water is gorgeous, and as the race started, my immediate thoughts were around how the race description of ‘undulating’ was not accurate:  ‘hilly’ is how this fella from the Fens would describe it!

In my view, Ralph didn’t need me to pace him, as we were pretty much at a similar pace at all times, apart from uphill, when I seemed to go on the attack, and downhill, when I rested and Ralph used these times to speed up.  We managed to have a natter, but not much of one, as our pace and the hills were just challenging enough to make conversation difficult.  We took in the scenery.  As we had started the race at the back, we found ourselves motivated by reeling in plenty of runners (but then, a good few reeled us in).  Then there was the end of the race, a sudden and steep hill, and the kind that makes your heart race, a LOT!  Just when I was relieved to have beaten the hill, another final and even steeper one was upon us, which Ralph and I chipped away at before the finish!  This is another race I will repeat, and perhaps I enjoyed it all the more for spending time with an old friend.

So, it is time to start the long runs again, but this time, I’ll need to learn to run a bit further and in warmer temperatures.  I have my French Foreign Legion hat ready: it’ll be hot!